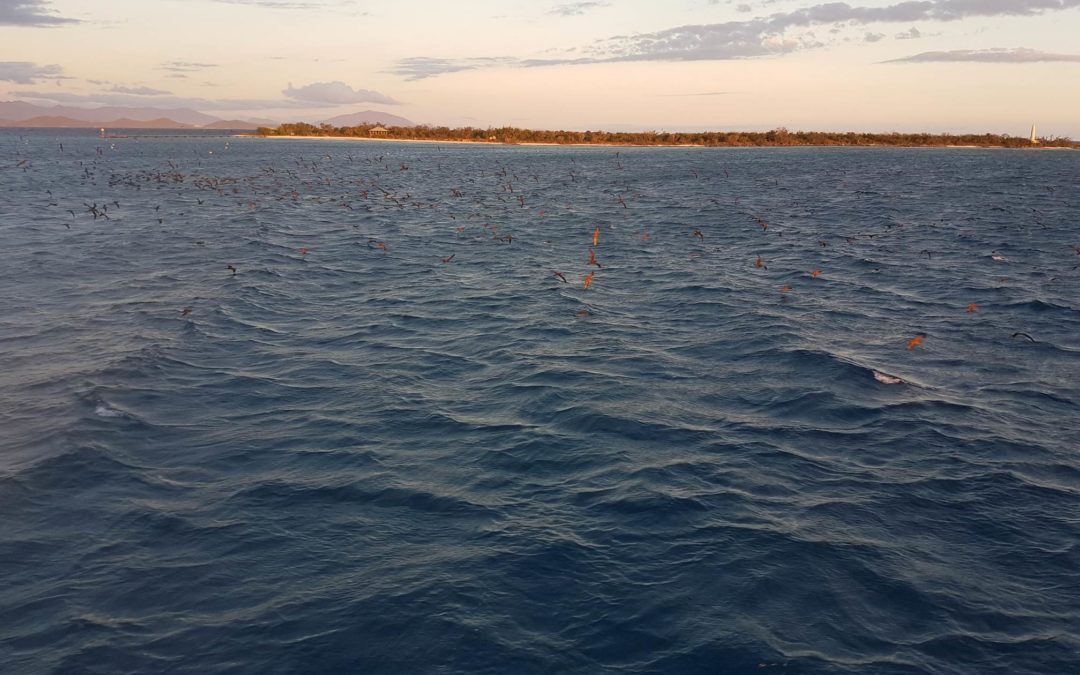 Following a world trend to accelerate protection of seas and oceans through immense protected areas, New Caledonia, and the French state, had several reasons to create the Coral Sea Marine Natural Park.

The official objective, widely advertised, was to create a protected area for wildlife and help France achieve its national and international goals.

According to the law on biodiversity reconquest (Loi sur la reconquête de la biodiversité) France is aiming at protecting 55,000 ha of mangroves by 2020 (50% of the national coverage) and 75% of coral reefs by 2021 in overseas territories.

At the international level, France supports this commitment within the International Coral Reef Initiative (ICRI).

However, because President Emmanuel Macron is leading a confusing policy on marine protection, whereby tremendous goals are only matched by industrial or mining projects, a new term has been used in France: “bluewashing”. It is the equivalent of greenwashing (pretending to protect the environment in order to conceal a polluting activity).

Therefore, it is interesting to examine what the creation of the XXL reserve encompasses so far.

The marine park management plan was adopted 4 years after its creation and it presents 40 vague objectives, and not any stringent, enforceable protection regulation.

The authorities ultimately in charge of the park, regardless of the the management plan, still have to create marine reserves inside the marine park to implement specific restrictions (fish, mining, etc.).

Nevertheless, it can be interesting to skim through some of the 40 objectives drafted throughout 4 years of debate within the newly established Coral Sea Natural Park Management Committee.

The protection of natural heritage aims to ensure the resilience of ecological processes that ensure the flourishing of wildlife and people. The structural and functional components of ecosystems are preserved in order to maintain the services they provide, especially in a context of climate change. The tangible and intangible cultural heritage, both modern and ancient, must be known, recognized, protected and enhanced so that the history and identity of the park are affirmed in its human dimension.

Goal I. Protect ecosystems and their connectivity

Coral reefs and associated land areas are critical to many species, supporting approximately 25% of known marine species, supporting approximately 25% of known marine species. Pristine coral reefs are reefs that have not been impacted by human activities. The isolated reefs of the park represent 30% of the world’s pristine reefs. They are among the richest in the world. They hold the new world record for reef fish biomass with 8.8 and 7.9 tons per hectare at Pétrie and Astrolabe against 7.6 and 7.5 t/ha in Cocos Island National Park (Costa Rica) and in the largest marine reserve in the world in Chagos (Indian Ocean) and with 6.9 and 6.7 t/ha in Chesterfield and Entrecasteaux against 5.3 t/ha in Kingman Reef (Pacific), the world’s reference for “virgin” sites.

The isolated reefs of New Caledonia constitute a unique heritage in the world, among the closest to what a “pristine” coral reef of any human impact should look like.

The exceptional richness of these coral reefs should be considered with particular attention, and benefit from the highest level of protection.

Marine protected areas have now largely proven their effectiveness as a tool for the protection of biodiversity and ecosystems. The park contributes to achieving the Aichi goals and to respond to the recommendations of the IUCN congresses to ensure the basis for a sustainable management of marine resources.

The identification of priority areas encompassing several ecosystems (ecoregions) can now be based on existing knowledge (regional strategic analysis (RSA), Areas of Conservation Importance (ACI), ecoregional analysis, Areas of Importance for Bird Conservation (IBAs), ecosystem profiles, etc.) while integrating areas of low conflict of use. It is necessary to develop a network of nature reserves that will allow for the representative and effective protection of all the park’s ecosystems.

Many species use multiple ecosystems during their life cycle, so maintaining connectivity between these ecosystems is essential.

In addition, there is a proven connectivity for some populations of cetaceans, birds, turtles and sharks between New Caledonia and its neighboring countries such as New Zealand, Australia, Papua New Guinea and Vanuatu, Solomon Islands, Fiji.

The establishment of highly protected ecological corridors linking ecosystems will thus promote their resilience. In addition, the creation of these protected areas within the park will better meet the recommendations of the IUCN recommendations.

Invasive alien species (IAS), both animal and plant, are now recognized by the IUCN as one of the greatest threats to biodiversity. Biological invasions are considered the second most important cause of biodiversity loss worldwide after the destruction and degradation of natural habitats. Controlling and fighting against these species by putting in place effective measures of prevention, control and, if necessary, eradication, allows to protect the natural heritage of the park. Raising awareness of park users to the presence of IAS is also a means to fight against their spread.

Human activities generate a range of disturbances and impacts that can affect populations of rare, endangered, and migratory species. The reduction of risks by strengthening regulations and increasing the means for their implementation.

The park already has several regulatory measures to protect whales, sharks and sea turtles, but these measures need to be strengthened and extended to other species, especially those considered rare, threatened or endangered.

This reinforcement must be done in coherence with provincial and international statutes and must allow a strong protection of these remarkable species. It will ensure the maintenance and resilience of the populations concerned by reducing the risks of negative interactions and disturbances on individuals and habitats.

One of the priorities of this sub-objective will be to list the heritage, rare and migratory species present in the park.

Fishing is an economically and socially important sector in New Caledonia. It is essential that this sector remains limited to New Caledonian vessels using certified longliners and that the maximum number of local licenses be maintained at its current level (21). The Local fishing vessels of less than 12 meters are not included in this limit.

No fishing license is granted to foreign vessels in the park except for derogation for scientific reasons.

New Caledonian longline fishing practices, targeting tuna, are labeled as responsible. The implementation of the sustainable fishing label, standardized through a set of specifications, is supported by the sector. This label must also be subject to continuous improvement and must be implemented by the entire fleet.

The effort deployed by the fleet is considered minimal in relation to the surface area of the EEZ and of the catches in the Pacific. However, the sustainability of the fleets is closely linked to their capacity to operate in the entire EEZ, excluding the natural and integral reserves.

It is appropriate that troll fishing, which has already been suspended, be prohibited in the entire nature park and bottom net and drift net fisheries should also be prohibited.

Active collaboration with fishermen must be sought, particularly in terms of surveillance of the marine area that is widely used by longliners.

It is necessary to know the issues and risks (ecosystemic and political) related to the exploration of mineral and hydrocarbon resources. The first step is to establish an inventory of existing data on these resources and on the risks associated with their exploration.

The environmental risk assessment be carried out on the basis of existing geological and biological data and samples available.

This approach must be multidisciplinary and call upon very different geological, biological, oceanographic, economic and ecological skills.

This knowledge will make it possible to set up a methodology for all future impact studies.

This methodology and the terms of the impact studies will be submitted to the to the Scientific Committee.

It is also necessary to provide for technological and economic monitoring and analysis of opportunities for the responsible development of the park, commensurate with the universal services provided and taking into account the international responsibility to support New Caledonia in its important contribution to the resilience of the Pacific Ocean. (…)

As any reader can understand, the subgoals set forth in the management plan are not binding for anyone.

Although soft law has its use at the international level, one can wonder why a committee composed of professional, civil society organisations and authorities, needed to draft a list of vague wishes.

Therefore, it can be affirmed that, so far, the Coral Sea Natural Park, in itself, is a tremendous case study of bluewashing.

Although it is not impossible that this park, and its committee, will help design and adopt stringent environmental regulations, the fact is that, 8 years after its creation and expensive communication campaigns, everything remains to be done.