International economic law corresponds to the set of rules governing commercial interactions between states. Its main purpose is to limit and harmonize protectionism measures and to facilitate international trade in products and services.

In the recent years and particularly under former President TRUMP’s mandate – and COVID-19 related fears of foreign products, the international community has failed to prevent protectionism from spreading in almost all the regions of the world. Although international trade rules are dated in many respects (particularly with regards to labor and environmental protection), it represents the best barrier against economic warfare.

Competent in foreign trade, New Caledonia’s government can take the measures it deems appropriate to protect and develop its economy. At the same time, its membership in the European Union (EU), through France, and by extension in the World Trade Organization (WTO) brings a set of rights and obligations that frame this power.

The competence of New Caledonia in matters of foreign trade is provided for by the organic law n° 99-209 of March 19, 1999 relating to New Caledonia, in particular its articles 22-6 ° and 55. It is then a convention signed on December 19, 2001, which organized the transfer of administrative services.

Within this framework, the Congress of New Caledonia regulates the quotas and tariffs applicable to the imports of goods by deliberation. Most of the import restriction measures enacted by Congress are aimed at protecting local industry by introducing tariffs (between 10 and 40%) and quotas. 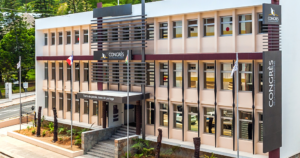 These measures can be challenged before the Administrative Court if they are unjustified or if their adoption did not follow a specific procedure.

Thus, a 23% agricultural and agrifood production support tax (TSPA) added to the value of frozen salmon fillets was canceled in December by the administrative judge. As the challenged tax was levied to protect a non-existent local industry, it had no reason to be raised.

ASSOCIATION WITH THE EUROPEAN UNION

As one of the overseas countries and territories (OCTs) of France, New Caledonia is integrated into the European Union. As such, it benefits from a special regime with regard to its member countries.

This option is framed by an important double condition. The OCT cannot distinguish between member countries and it cannot be “less favorable than most-favored-nation treatment”. That is, the taxes applied to the EU cannot be higher than the lowest taxes applied to a third country.

This rule is also applied since, in New Caledonia, products from third countries are subject to an average tax of 30%.

At the end of the organic law n ° 99-209 of March 19, 1999, the Congress of New Caledonia is competent in matters of foreign trade and customs regime. In this context, the Congress of New Caledonia can enact market protections. Various taxes have been set up to protect local products, such as the Support Tax for Agricultural and Agri-Food Production (TSPA) created by the country’s Law n ° 2000-005 of December 22, 2000.

The amended deliberation n ° 252 of December 28, 2006 relating to market protection in New Caledonia and its implementing decree n ° 889 of March 1, 2007, provide as well in order to facilitate the sale of products manufactured in New Caledonia Caledonia on the local market, to allow them to become competitive with imported products and thus promote the development of local businesses, it can be established, when the general economic interest of New Caledonia justifies it, protective measures. to restrict the importation of competing products.

It should be noted that the lifting of a new tax on imports, like the lack of protection, is open to appeal before the administrative court.

On the other hand, the Congress of New Caledonia must be consulted on bills authorizing the ratification or approval of treaties or agreements falling within the competence of the State and intended to apply in New Caledonia, including European Union bills relating to the association of the overseas countries and territories with the Union (article 89 of the organic law of March 19, 1999).

Underexploited benefits of a “one-way” integration into the WTO
For all non-EU countries, New Caledonia benefits from multilateral agreements signed by France within the framework of the World Trade Organization (WTO). The general principles of the WTO are based on the 1947 General agreements on Tarriffs and Trade  (GATT). The pillar of the GATT is called the most-favored-nation (MFN) rule, which states:

New-Caledonia benefits from a vast access to all the WTO member states’ markets, without being sanctioned when it raises trade barriers against.

While American products are subject to taxes upon entry in New Caledonia, the United States does not apply any form of quotas or tariffs to New Caledonian products.

It seems that the United States can allow such an imbalance to persist for two reasons: New Caledonia does not present any threat to producers in any American market; and the trade balance remains largely positive for the United States.

However, it seems that this situation is more awkward vis-à-vis neighboring trading partners of New Caledonia.

As with the United States, Australian products bear taxes upon arrival in New Caledonia (as non-European products), which are compounded by seasonal quotas. These obstacles constitute an obstacle to the progression of Australia’s market share in New Caledonia, which peaks at around 10%.

Products originating from New Caledonia, for their part, have benefited for several years from an advantageous regime and enter Australia duty free.

However, unlike the United States, Australia cannot regard New Caledonia as an insignificant market. Indeed, the territory constitutes for Australia the fourth export market for the Pacific, behind New Zealand, Papua New Guinea and Fiji. In 2008, Australian goods exported to New Caledonia amounted to over A $ 350 million (coal, engineering equipment, boats and floating materials, dairy products, cereals and derivatives).

In this context, Australia and New Caledonia started discussions in 2002 to base their trade relations in a bilateral convention.

To conclude, New-Caledonian protectionism has not generated any dispute with other members of the WTO because the territory’s exports are not significant. However, it should be noted that, if one or more New- Caledonian industries were to take more significant market shares in certain countries, the latters could seek more actively to negotiate free trade agreements so that their products would not face any trade obstacles when entering New-Caledonia.